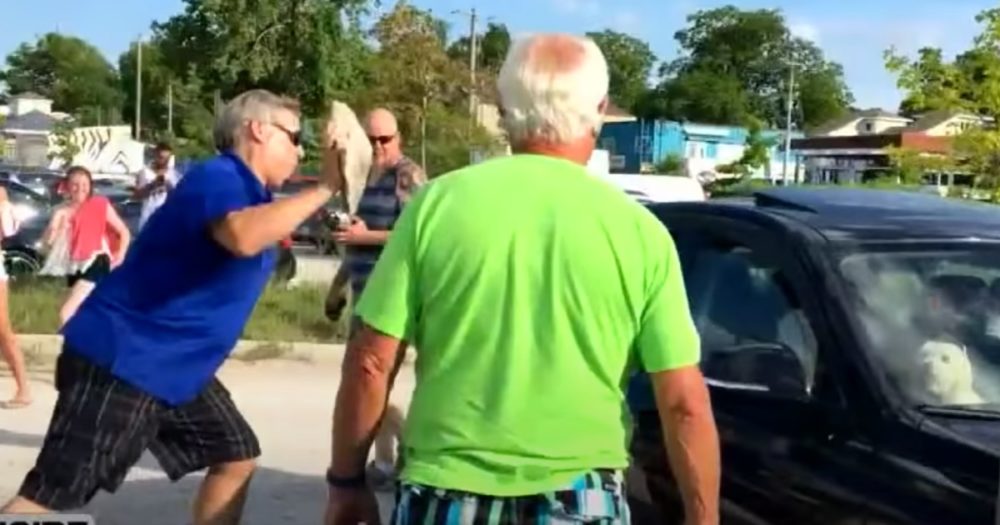 When traveling with your fluffy companion, everyone should know not to leave their dog in a hot car. Either take your dog with you where you are going or crack a window or leave the air conditioning on. In this video, a careless dog owner left their dog in a hot car during the summer, and a good Samaritan risked being arrested to save the poor, helpless dog.

On a hot summer day in Canada, a man comes across a locked car with a dog without the windows cracked and no owner in sight.

The video takes place in Canada, where a man named Mark Lewis came across a black BMW with a black interior in direct sunlight, where a dog was locked in. This video takes place on June 11th, where the temperature outside was ninety degrees, so who knows how hot the car was inside.

Multiple people started to help Mark Lewis break into the car to save the dog, obviously overheating and panicking. According to Today, a Kitchener resident said the owners had been gone for about 50 minutes, despite an announcement asking them to return.

The dog was sitting on the passenger side, so Mark Lewis picked up a big rock and threw it multiple times through the back window until the window broke, and he was able to get the dog, named Cotton, out of the hot car.

When the window broke and finally able to rescue the poor pooch, the people around applauded his heroic actions.

According to Mark Lewis, when they got the dog out of the car, he was quite lethargic and drenched in sweat.

No one is completely sure how long poor Cotton was left in the hot car, but by the time the bystanders saved him, he was quite lethargic, basically draping over Mark Lewis’ arm. Luckily, after giving him some water, Cotton came back to full energy within five minutes and was playing happily.

Mark Lewis had a few words to share with the dog’s owners,

“You really have to use your best jusgement and on that particular day, the owners of this dog in this car, did not use their best judgement.”

The owners of the dog did not file a formal complaint against the man and are now under investigation themselves.

The owners and police arrived simultaneously, which was still another fifty minutes later, and who knows what would have happened to Cotton if no one saved him! According to Today, the Ontario Provincial Police are conducting an ongoing investigation with the Society for the Prevention of Cruelty to Animals and Huron County Human Society.

No charges or penalties have come yet, but according to Section 445 of the Criminal Code of Canada, anyone who willfully and unlawfully causes pain or suffering to an animal can face a maximum $10,000 fine or imprisonment from 1.5 to 5 years. Since these owners couldn’t be bothered to check on poor Cotton should get a penalty of some sort!

It is recommended to call animal control in a situation like this to tow the car and retrieve the animal without causing damage. Still, at the moment, anyone would do anything to save a dog that looks like they are about to pass out from being overheated.

This video was posted on Inside Edition’s YouTube Channel and definitely took the media by storm.

Inside Edition is television’s longest-running, top-rated news magazine. On YouTube, they are number one in news and politics. This video definitely needed to be shared, and it’s nice to see such a big news channel share this man’s heroic actions.

If you need your faith in humanity restored, this is a good video to watch for that. It’s nice to know people were willing to do anything to save Cotton’s life.

Check out this uplifting video down below and see for yourself the heroic actions of this man!